U-turn on Car Parks Policy Welcomed by the Conservative Group 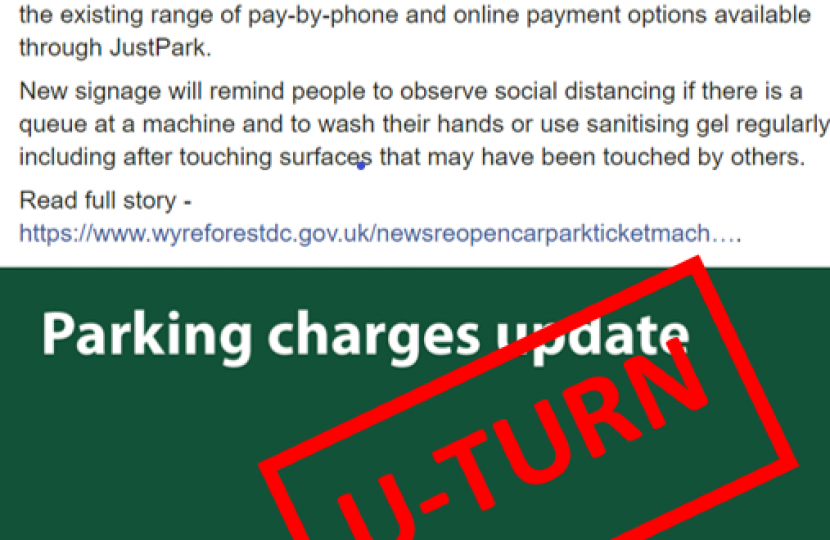 The Conservative Group on Wyre Forest District Council previously announced that they did not support the Progressive Alliance’s decision to not take cash payments in its pay and display machines as of 1st June when charges were reintroduced.

Conservative Group Leader Councillor Marcus Hart says, “In our view the original decision had been made without any consideration for those who either do not own a smart phone or do not have a phone with them when they want to park. We are delighted to see that as a result of our concerns and representations and the clear public outcry at this ill thought out decision that the Progressive Alliance have now seen sense.”

Cllr. Chris Rogers who represents Stourport residents added, “This was a sledge hammer to crack a nut and the Progressive Alliance have been forced to do a humiliating u-turn.”

Cllr. Anna Coleman who represents Bewdley added, “We felt that the original decision was discriminatory to elderly residents in particular and also feel that we should be making it as easy as possible to use our car parks."

Cllr. Marcus Hart added, “Clearly there are health and safety implications of handling cash but all of the supermarkets have measures in place and we are pleased that the Progressive Alliance have seen sense and now realise that they can put safe operating procedures in place for our staff and car park users. It is just regrettable that they have handled this situation so poorly.”

The Wyre Forest District Council, under the administration of the Progressive Alliance, a coalition of Liberal Democrats, Independent Health Concern, Independents, Labour and the Green Party councillors, propose as of April to remove free car parking at a number of car parks, introduce evening ca