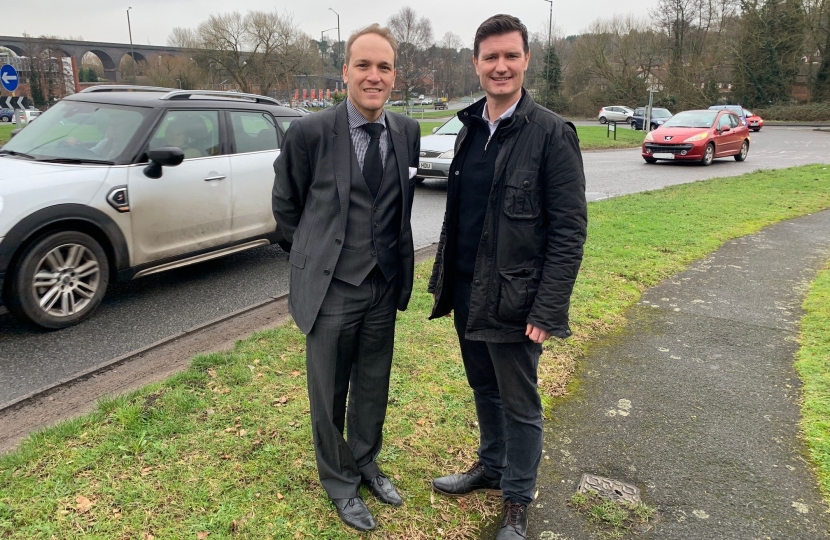 County Councillors Nathan Desmond and Marcus Hart are delighted to announce that the final design for improvement works to Kidderminster’s Hoobrook Island are due for completion in October.

The Conservative-led County Council allocated £5 million in its budget for 2019-20, which was earmarked to address congestion at four strategic locations across the County, which Hoobrook Island was one. As part of this year’s budget proposals a further £5 million is being proposed as part of the Conservative Council’s strong commitment to tackle congestion and to get this scheme delivered and to tackle congestion on the island.

Worcestershire County Council are in the final stages of planning improvements to the island which will include adding traffic signals and widening the approaches for the A449 and A442.

The circulatory lanes on the island itself will also be increased with the aim of improving journey times and reducing congestion by increasing the capacity and flow of traffic on the island.

Cllr Nathan Desmond said, “ This issue has been my number one priority and for three years I have been campaigning for a long term solution to tackle congestion on the island. I am delighted that the final design is almost complete and the improvements, which are significant to Hoobrook Island will make a huge difference to tackling congestion and improving traffic flows”

Cllr Marcus Hart said, “ This island for many years has been gridlocked in rush hour in both morning and the evening and its fantastic that significant funding has been made available by WCC and the final plans are really exiting that will significantly address local residents concerns about traffic congestion on the island”.

It is anticipated that the final designs will be completed in October with a plan to start work later this year.

County Councillor Rebecca Vale is pleased to report back with regards to residents' concerns over pedestrian safety on Dowles Road, Bewdley.