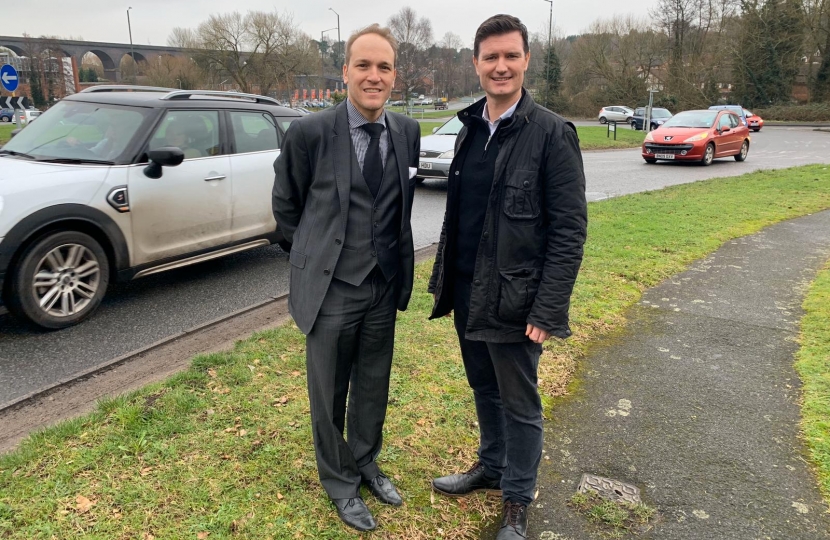 Local County Councillors for the Aggborough and Spennells areas of Kidderminster, Cllr Nathan Desmond and Cllr Marcus Hart, are delighted that further funding is being allocated to the Hoobrook Island scheme.  The Conservative-led County Council allocated £5 million in its budget for 2019-2020, which was earmarked  to address congestion at four strategic locations across the County of Worcestershire of which Hoobrook was one.  As part of this year’s budget proposals a further £5 million is being proposed as part of the  Conservative Council’s commitment to tackle congestion and get this scheme delivered.  Marcus and  Nathan have been in regular liaison with senior officers, pressing for a scheme to be designed and implemented and are very pleased a scheme is now actively being worked up.

Nathan says, “I have been campaigning for a solution to the major congestion at this island for a number of years as it affects many of the local residents that I represent and I am very pleased that additional money has been made available on top of the funding last year, to enable significant alterations to the Hoobrook Island to be delivered, which will have a huge impact on tackling congestion.“

Marcus added, “Since being elected to represent Spennells residents on the County Council in 2017, this has been my number one priority. This island is gridlocked in rush hour in both the morning and the afternoon and it was very clear that traffic flow on the A449 in and out of Kidderminster at peak times needed to be addressed. This will also have a positive benefit for my rural communities as I firmly believe that if the traffic flow can be improved at peak times then there will be less rat-running along country lanes within the Stone Parish.”  It is anticipated that details on the final scheme will be confirmed over the next couple of months with a view to work commencing and being completed over the next 12 months.

County Councillor Nathan Desmond is delighted to announce that he has provided the funding to enable new LED light bulbs to be recently installed across Hoo Road.